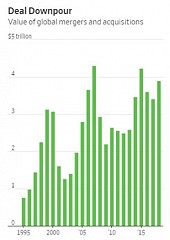 The year got off to a fast start for deal making as companies struck mergers including Takeda Pharmaceutical Co.’s $63 billion acquisition of Shire PLC. The pace was so torrid, some thought 2018 would be the biggest year ever for M&A.

But choppy financial markets, trade tensions and fears of an economic slowdown hampered deal makers when they returned from summer vacation. It was still a good year and is set to go down as the third-busiest ever for M&A, trailing only 2007 and 2015, with more than $3.8 trillion in announced deals.

It was also a good year for the bankers and lawyers who helped arrange all those corporate marriages, for which they reap fees that can run into the tens of millions of dollars. The Wall Street Journal spoke to some of those who landed the biggest fish and asked, among other things, what’s in store for 2019.

Read the full article at the Wall Street Journal.